Working Women and The Glass Ceiling

The percentage of working women in senior management positions in South Africa is increasing rather slowly. The proverbial glass ceiling is still firmly in place. One wonders why? 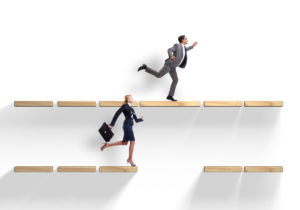 The so-called “glass ceiling” is a metaphor for the invisible and artificial barriers that block women from advancing up the corporate ladder to management and executive positions. The glass ceiling may be showing some cracks but it is still firmly in place as recent research reports on women in business indicated.

Globally, women own and manage around 30% of all businesses, according to an International Labour Organisation (ILO) report. However, they control just 5% of the biggest enterprises around the world. And, although there has been an increase in the number of women in especially senior and middle level management positions, women are still being shut out of higher level economic decision-making.

What’s the situation in South Africa?

According to Grant Thorton’s International Business Report (IBR), South Africa’s top management positions are still dominated by men. Women fill just over a quarter of top decision-making roles in South African businesses. However, the larger the company, the less likely the head would be a woman. All-male company boards are still common but the portion of women holding board seats has increased to between 10 and 20%. Surprisingly, the number of women in chief financial officer (CFO) positions more than doubled in 2013 (32% compared to 14% in 2012).

Thankfully, the proverbial glass ceiling, though still firmly in place, is showing some cracks!

The pillars that are supporting the glass ceiling and holding women back are numerous and diverse.

Here are a few examples:

Gender stereotypes and gender communication differences pose dilemmas for women. Women’s style of communication can lower perceptions about their abilities. If a woman exhibits too much assertiveness, which is contradictory to the traditional warm, soft-spoken female stereotype, she may be labelled a real “bitch”. If she doesn’t she may be perceived as a “walkover”.

Career pipeline barriers such as lack of mentoring, initial placement in dead-end jobs, different standards for performance evaluation for women and men, and little or no access to informal networks of communication impede the progress of women to the top.

Lack of flexible work arrangements is another reason women are being held back. The struggle to balance demands from work and demands from home is often just too high a price to pay.

Women are often hampered in their careers by lower ambitions and expectations mostly due to lack of self-confidence and self-belief.

Employers must put in place comprehensive, organisation-specific programmes that address breaking down structural, organisational and cultural barriers. Voluntary targets should be set for female representation on boards, executive committees and senior management. Flexible work arrangements and work-life balance polices should be set in place. Mentoring programmes to help identify, develop and promote potential top women candidates should be created.

Women, on the other hand, need to get over their lack of self-confidence and self-belief and stop being “people pleasers”. They need to raise their career expectations and need to identify goals and pathways to help move their careers forward.