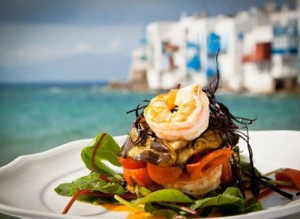 What does the research say?

The Lyon Diet Heart study, published in 1994 in the Lancet, was the first and landmark clinical trial to prove that the Mediterranean diet protects against heart disease. It was a prospective, randomized single-blind control trial with a sample size of 605 adults less than 70 years of age with a history of myocardial infarction (MI). The experimental group were given information on the Mediterranean diet and advised to include more bread, vegetables (green & root), fruit, fish, less red meat and to replace it with poultry, margarine that was supplied by the study (same composition to olive oil with added alpha linolenic acid) and to replace butter and cream. Oils recommended were olive and rapeseed oil and they were allowed moderate intakes of red wine with meals. The control group were given the usual dietary advice on the prudent diet by their attending physicians. Compared to the control group those who were randomised to receive the Mediterranean diet received more fibre, vitamin C, omega-3 from both plant and fish sources, and received less saturated fat and cholesterol. The participants were monitored for 4 years, after which those in the experimental group showed a reduced rate of MI, other cardiac events, and overall mortality compared to those in the control group. This meant that those eating the Mediterranean diet had a 50 – 75 % reduction in risk for another heart attack. These results were further supported in a systematic review by Sofi et al (2010), who concluded that adherence to the Mediterranean diet resulted in a 10% reduction from death and /or incidence of cardio- and cerebrovascular diseases with a 8% reduction of death from any causes.

The Mediterranean diet is proven and so we should all follow the main principles where possible.