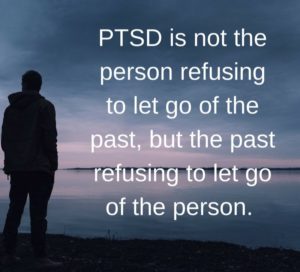 PTSD is a fairly common mental illness that results from traumatic experiences like rape, assault, violence, conflict, warfare, motor vehicle accidents, child abuse, or the threat of such things. PTSD is quite common in wartime situations hence its being previously known as “shell shock” or “combat neurosis”. A surge in US cases arising from the Vietnam war led to PTSD being recognized in its current form in the early 1980s. PTSD is not limited to soldiers and it is increasingly common in societies where violence is commonplace.

PTSD causes a range of symptoms that include recurring nightmares, flashbacks and unpleasant memories, insomnia, anxiety, distress and panic when confronted by certain reminders or triggers, as well as low mood and depression. PTSD can be quite severe and is associated with an increased risk of suicide.

PTSD affects some 3% of adults in a given year and some 10% of people will experience PTSD at some point in their lives. It is likely that many more people experience milder forms (e.g. occasional flashbacks) that they are able to cope with (life can continue as normal) but such cases are not true PTSD (a diagnosis of PTSD usually requires at least 3 months of symptoms sufficient to interfere with normal living).

PTSD can be treated with counselling and or medication. A special class of antidepressant-type medication, known as Selective Serotonin Reuptake Inhibitors (SSRIs) are most often used. Over half of patients do well with a combination of counselling and medication. Various forms of psychological support, given immediately or soon after a traumatic experience, have been tried, with mixed results. It is not clear how helpful these post-trauma interventions are although it is clear that the early treatment of actual PTSD is helpful.

PTSD is a serious condition that results from traumatic experiences. It is unfortunately quite common and mild forms (perhaps not requiring professional treatment) are probably extremely common. Anyone who has been through trauma should be aware of the possibility of developing PTSD, and seek professional help if needed.