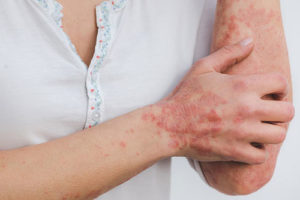 Psoriasis is a fairly common skin condition that affects about 1 in 20 people worldwide. The cause is not known but it is clear that genetics play a role (risk runs in families) and that stress or severe illness can be triggers. Some medications have been implicated in triggering attacks (anti-inflammatories and beta blockers in particular). Psoriasis is not infectious or contagious in any way. It is a life-long chronic condition that usually starts in adulthood, being characterised by a variable course (exacerbations with quieter periods between). Women and men are equally and similarly affected.

Psoriasis typically presents as raised red patches with a silvery/white flaking scaly-ness. This rash is most often seen on the forearms, hands, and scalp, but it can be anywhere.

The treatment of psoriasis aims for control rather than cure. Steroid creams, vitamin D creams, and UV-light are all used. More severe cases (about one in four cases) may require stronger medications to suppress the abnormal immune response (autoimmune response) that is at the heart if this condition.

Approximately 25% of people with psoriasis develop a special type of arthritis (psoriatic arthritis) associated with psoriasis. This can be very problematic and requires specialist care.

Psoriasis is a fairly common skin condition that causes quite a lot of discomfort suffering, especially in more severe cases. It should be diagnosed early and treated by skin specialist ideally.