How Healthy is Your Braai? 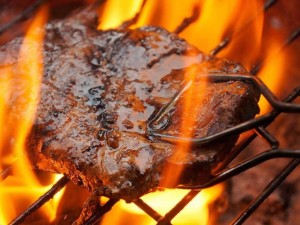 Yes, South Africans do love a good old braai and find several occasions to celebrate over “n stukkie vleis”, whether it’s watching a rugby or soccer match, a birthday party or just celebrating the weekend and warm weather. It’s not a uniquely South African thing but it is certainly a strong part of our national identity.

One might wonder though how good charred meat is for you and with cancer incidence on the rise and the recent scares around red and processed meat causing cancer, we may need to have a closer look at how healthy this is and if we need to say bye to the braai.

WHAT DOES THE SCIENCE SAY?

Research does in fact show that cooking meat at high temperatures can create chemicals that may increase cancer risk. Heterocyclic Amines (HCAs) and Polycyclic Aromatic Hydrocarbons (PAHs) are two of them and are formed during cooking of muscle meats such as beef, pork, fowl and fish due to a reaction between amino acids and creatine at high temperatures. High temperature cooking includes pan frying or grilling over an open flame, braai’ing and smoking meats. Research has shown that high consumption of well-done, fried or braai’ed meat increases risk of colorectal, prostate and pancreatic cancer.

It also isn’t new information that red and processed meat in itself may increase cancer risk as it has been part of the nutrition recommendations for cancer prevention as “Limit intake of red meat and avoid processed meat”, published in the Food, Nutrition and the Prevention of Cancer: a Global Perspective. In 2015, the International agency for research of cancer (IARC) announced that processed meat has been classified as a ‘definite’ cause of cancer and red meat is a ‘probable’ cause.

This doesn’t however mean that we should never eat red or processed meats again, besides there are other factors which have a far greater association to cancer, such as smoking or being obese. The emphasis rather is to not eat excessive amounts, particularly over a long period of time. Besides, meat can be a valuable source of nutrients such as protein, iron, zinc and vitamin B12 so simply put, the key is moderation (as ever).

Knowledge is power and now that you know the risks that are involved, here’s some happier news with some surprisingly exciting and practical tips on how to make your braai healthier.

You can enjoy a braai and eat healthily. Some smart choices and a bit of moderation will really help.