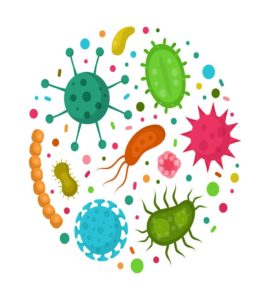 Bugs……a topic that can give us “the creeps”. For clarity we are not talking about computer-code glitches or planet-invading aliens or even about creepy-crawlies. In this short Quite-Interesting-Science article we’ll describe the four most common types of micro-organisms that infect humans and cause disease. This should help you understand what these conditions are and how they are best treated.

There are four main types of micro-organism that infect people: viruses, bacteria, fungi, and parasites.

Viruses are the tiniest of the bugs. Viruses cannot survive on their own and they use/take-over the host cells to reproduce themselves, usually destroying the host cell in the process. Viruses do not respond to antibiotics and even though there are some special medications (not antibiotics) like HIV anti-retrovirals (which can and do control the virus) most viral illness cannot be stopped/cured and doctors tend to rather focus on managing symptoms while patients recover in time. Vaccines can and do confer immunity against many viruses – diseases like smallpox, polio, measles, mumps, rubella, and even seasonal flu have all been effectively controlled or even eradicated by vaccines. Common viral illness include seasonal colds & flu, most forms of gastroenteritis, certain types of meningitis, and hepatitis.

Bacteria are larger than viruses and do have some capability to survive and reproduce without a host. Most bacteria do respond to antibiotic treatment although the over-use of antibiotics can encourage bacteria to mutate and become antibiotic-resistant, which is a growing concern today. Common bacterial illnesses include tonsillitis, some forms of pneumonia, some forms of meningitis, skin infections like boils and impetigo, TB, cholera, and many middle-ear infections.

Fungi (plural of fungus) are larger multi-cell organisms that spread by distributing spores. Fungi are usually kept in balance by the body’s own natural micro-organisms (good bugs) and so fungal infections are often seen in the immunocompromised, the elderly, the very young, those taking antibiotics (which may disturb the natural bug-balance within the body). Fungi do respond to special anti-fungal antibiotics. Fungi most commonly cause external conditions like skin infections (athlete’s foot, ringworm) and infections of orifices like the mouth (e.g. oral thrush) and vagina (e.g. vaginal thrush) but can also cause conditions like fungal pneumonia (lung infection), especially in vulnerable people.

Parasites are also single-celled organism that can survive outside of the host. Parasites are often water-borne and can cause illnesses like dysentery and intestinal worms. Parasites may also attack the skin in the form of mites, ticks, and fleas, etc. There are effective treatments for most parasitic infections.

So there’s some Quite-Interesting-Science. The key message is that these are quite different types of organism and the illnesses they cause are also quite different. MOST important of all is the reality that antibiotics, as we know them today, are really only effective against bacteria – given that excessive use of antibiotics (e.g. when dealing with a virus that will not respond to antibiotics at all) can lead to resistance it becomes clear that understanding the bug involved in a given illness is really important.