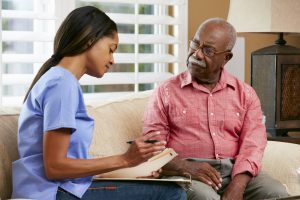 Alzheimer’s disease (Alzheimer’s) is characterised by gradual degeneration of the brain, typically beginning with short-term memory loss that progresses to full incapacity and withdrawal from society. Alzheimer’s affects some 6% of people over 65, becoming more common as we age so that over 20% of those over 75 have Alzheimer’s.

NOTE FOR CLARITY: Dementia is the general term for all conditions that cause a decline in cognitive function (the ability to think). There are various causes for dementia, including repeated strokes, but Alzheimer’s accounts for over two-thirds of dementia cases.

The cause of Alzheimer’s is not understood but genetics play an important role, with the children of affected parents at increased risk. It is also know that maintaining an active mind & body is protective (people who read, do crosswords, learn new skills etc. have reduced risk, as do the physically fit). Poor cardiovascular health (e.g. obesity, high blood pressure, high cholesterol, impaired circulation) is also associated with increased risk. Recent research has shown a strong link (50% risk increase) between the chronic use of sleeping pills (3 months or more) and Alzheimer’s so this may be an important consideration for many – please ask your own doctor for advice here.

Alzheimer’s is diagnosed clinically, although certain tests (e.g. brain scans) are usually done to rule out other (possibly treatable) causes of dementia.

There is no truly effective & proven way to prevent or to treat Alzheimer’s. Despite certain claims, there is no compelling evidence of prevention or treatment success. That said, there is suggestive (weak) evidence to suggest that maintaining a healthy weight, eating a low-saturated-fat healthy diet like the Mediterranean Diet, drinking modest ammounts of red wine and caffeine, and staying active mentally as well as physically, may reduce Alzheimer’s risk somewhat.

Disease-progression varies but lifespan-post-diagnosis is usually 4-10 years. During this time the burden on patient, family & caregivers can be severe. General care and increasing levels of supervision are needed, with many patients spending their last years in an institution.

Alzheimer’s is more and more common as we live longer. Unfortunately there is little we can do to prevent or to treat this cruel condition that causes so much family distress. Early recognition of the diagnosis, and good honest family counselling around practical care & support, are perhaps the most important approaches.