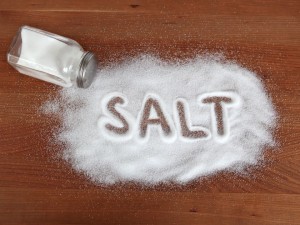 Salt. A mineral which is probably the most commonly used globally, and which has deep roots in the development of humankind. Not only is it used in the flavouring and preservation of food, but is also an antiseptic. In ancient times, salt was one of the world’s principal trading commodities, and interestingly in later times it also served as a symbol, where your social standing was ranked according to how closely you were placed to the saltcellar at the table.

Salt is a common name for sodium chloride, which is made up of one sodium ion and one chloride ion. The part of salt that has health implications is the sodium ion. Salt is needed by the body in small amounts (1.25 g/day) in order to function properly. It is important for normal cell function, blood health (maintaining plasma volume) and transmission of nerve impulses.

Health issues associated with too much salt

So, we need salt, but the problem comes in when we consume too much salt. Health conditions associated with high salt intake include:

How much salt do we need?

According to the World Health Organisation (WHO), one should only have 5g of salt per day, or 2000mg of sodium, which comes to 1 teaspoon from all sources! If you think about all the food you eat in the day, are consuming 5g of salt per day? Probably not, given its wide use for flavouring and preservation. In fact, studies indicate that South Africans currently consume 6 – 11 g of salt per day! This can be twice the recommended limit. It is therefore not surprising that we have one of the highest rates of hypertension.

Sources of salt in the diet

Salt is consumed from a number of different sources:

All foods contain some salt (5%) naturally, including milk, meat and vegetables.

Discretionary salt refers to salt that is added during cooking as well as at the table. In fact, about 40% of salt intake comes from discretionary salt! Himalayan salt is often used as a “healthier alternative” to typical table salt. However, salt is salt, and even though it may contain small amounts of other trace elements (which can be consumed via better food sources), it can still contribute negatively to one’s health if consumed in large amounts.

The highest contributor of salt intake comes from processed foods, which accounts for 55% of the South African diet! These foods contain “hidden salt”, which may not be obvious. The daily contributors to salt intake in South Africa are listed in order below:

And that is just a few! So now that we see how one meal / snack contributes to total salt intake for the day, remember that most of us eat at least 3 times per day…It all adds up! The image below, taken from the Salt Reference Manual by The Heart and Stroke Foundation South Africa illustrates this nicely, although not all of us would eat all of the foods depicted below in one day.

THE BOTTOM LINE: Salt is a problem. Hidden salt is the biggest problem. 5g or one teaspoon a day is your limit. Read labels. Take care.