E-cigs; what is the truth?

Home/Features/E-cigs; what is the truth?
Previous Next

E-cigs; what is the truth? 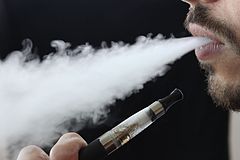 Electronic cigarettes, or e-cigs, are all the rage. There are pop-up stores and online stores everywhere you look. Some 5-10% of adults now smoke e-cigs worldwide, and the numbers continue to grow. So what’s it all about and is it safe?

E-cigs heat a liquid that usually (but not always) contains nicotine, to produce a vapour that is inhaled. The first prototype was patented in 1965 although the modern design was introduced in 2003. There are now some 500 brands of e-cig with new designs being introduced constantly.

E-cigs are used to help smokers quit and or as an alternative to smoking. They are also sometimes used to inhale cannabis (this habit is more commonly called vaping). Some users purely enjoy the vapour and have created a hobby of “cloud chasing”.

E-cigs do produce harmful substances but are generally considered to be much less damaging than regular cigarettes. Some authorities consider the health risks to be negligible or insignificant but this view is controversial. E-cigs do not produce tar, carbon, ash or carbon monoxide (normal cigarettes do). Most of the toxic substances found in cigarette smoke are absent from e-cig vapour, or present at concentrations less than 1% of those found in cigarette smoke.

Because e-cigs are relatively new, the long term effects are not really known, although it seems likely that they will be less harmful than regular smoking. Safety in children and during pregnancy has not been adequately studied (nor is it likely to be) and so should be viewed with caution (= avoided).

There is debate about the effects of passive smoking (inhalation by non users resulting from proximity to an e-cig user). Some authorities feel it is completely safe but this seems an extreme view at this time and so most public-spaces do prohibit e-cigs even though many households do not object to e-cig use even indoors.

Nicotine is highly addictive (similar to heroin and cocaine) and so are e-cigs. This has created concerns that non-smokers may become nicotine addicts nonetheless, via e-cigs. This seems a very real and reasonable concern, although only a small percentage (less than 10%) of e-cig users are never-smokers. What may be of more concern is that a number of smokers now use e-cigs in addition to smoking, thereby increasing their overall nicotine intake. E-cigs can be recommended to smokers looking to quit, as a form of nicotine replacement (nicotine replacement is known to help quitters). Ideally the quitter should only use e-cigs for a limited period of time (this is not usually the pattern unfortunately).

Leading health authorities see e-cigs as a useful option for those trying to quit smoking and do agree that e-cigs are significantly less harmful than cigarette smoking. There are concerns around children, pregnancy, long term safety, and the very-real possibility that e-cigs add to a smoker’s nicotine intake.

E-cigs may be something of a good-news story on the health front, but we should be clear in saying that e-cigs are not actually “good for you” – it’s just that they are not (nearly) as bad for you as smoking.